Are doctors too obsessed with technology and computers? 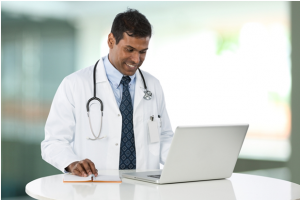 Perhaps unlike any other force in the last 10 to 15 years, technology has had a massive and systemic impact on the healthcare industry. Between advancements in computing technology and groundbreaking research efforts, doctors and other medical professionals can now communicate more effectively, make use of a wider scope of data, interact with patients in more meaningful ways and generally devote more time to actual medicine.

Yet at the same time, there are those that believe this surge of technology has had its share of downsides, and ultimately doctors have become too dependent on this advanced set of tools. The fact of the matter is that the real story is a bit more complicated than either side might admit.

“Technology could replace 80 percent of a doctor’s routine.”

Perhaps part of this dependency issue stems from just how integral technology has become to modern medicine. As Fortune reported back in 2012, technology could one day replace as much as 80 percent of a doctor’s everyday routine. That includes writing prescriptions, enacting behavior modification among patients, and performing even basic tests and diagnostics. The fact of the matter is that for these and similar tasks, sensors, analytics and data-collecting technologies are simply more effective and accurate overall.

And this is backed up by several different studies. One such endeavor from 2012, organized by researchers at Massachusetts General Hospital, found that in cases of treating high risk patients, computers reached a diagnosis before doctors 25 percent of the time. Given that, it’s no wonder so many doctors have come to rely heavily on the suite of technology that’s available.

A matter of attention

Even with the increasing prevalence of technology-oriented medicine, there is no denying that overdependence has some pronounced downsides. Some of those issues are fundamental. In 2007, during a symposium for the American Medical Informatics Association, one presentation highlighted just a few basic consequences of technology dependence. Namely, no matter the system, issues like downtime and inaccurate data are always a problem, and these issues can complicate doctor’s efforts to interact with patients.

But the real problem with technology dependence goes further still. Many healthcare insiders feel as if it takes away from the essential patient-doctor connection, and computers can sometimes prevent doctors from engaging patients on a truly personal level. In fact, per a 2014 study from Northwestern University, doctors spend one-third of an average visit looking at computer screens. That not only leaves patients feeling disconnected, but as many argue, increases the risk that doctors might miss something they’d otherwise uncover during normal interactions and examination.

Most doctors believe that technology is a good thing, and they’re likely right. But as a 2011 study from the Journal of the American Medical Informatics Association explained, it’s often about how the technology is used. It’s not enough to simply balance technology with traditional patient approaches. Instead, as the study argued, it helps to bring patients into the process, and have them use technology alongside physicians to aid their personal healthcare. That could mean communicating online or tracking their own electronic records.

Either way, this so-called triadic relationship is one way to ensure that technology continues to be a tool for growing the possibilities of healthcare for everyone.